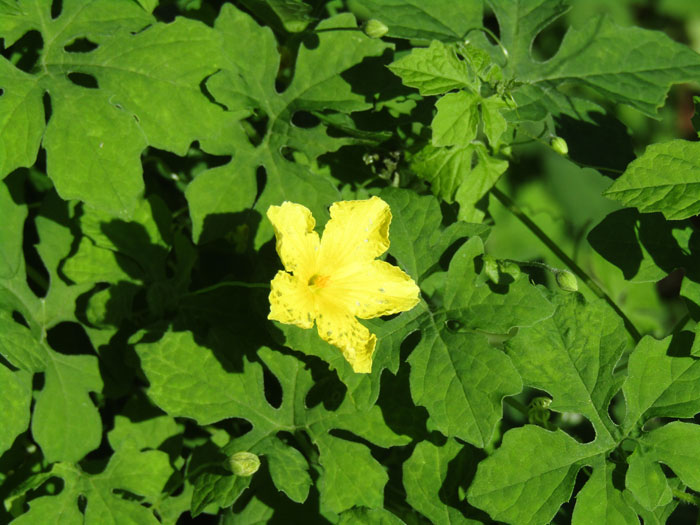 There is an awful weed growing in some of our yards.  It's a very, invasive vine and is called Momordica and belongs to the cucumber family.  The common name for this invasive vine is Balsam pear, balsam apple or bitter melon.

The vines of this plant can grow to 10 feet or more throughout your shrubs and trees.  At first it's not very noticeable but it slowly creeps along branching out all over and  before you know it the vine has totally taken over.  When you go to remove it you will notice it has very slender, delicate stems that break off when you start pulling on it.  It's best to locate the base of the vine and pull it making sure you get the entire root.  I also suggest that you wear gloves as this vine doesn't have a very pleasant odor and removing the smell from your hands isn't easy.

It has small yellow flowers along the vine and after the flowers die the fruit portion forms.  The stems are slightly fuzzy with tendrils, leaves are dark green and deeply notched and lobed.   The fruit is small, green with bumps all over it's waxy skin.  When  mature...it turns a bright orange and eventually splits open to expose a bright scarlet interior which contain the seeds.

In the Orient, it can be purchased canned or dried and Pulp of these seeds is eaten.  It's also used in soups and as a vegetable.  When the fruit matures it has a bitter, acrid flavor.  Actually, I wouldn't suggest that you eat any part of it as it's on the Florida Poisonous Plants list.  In some parts of the world it is used medicinally.  But in the U.S. it is grown mainly as a curiosity.

If you're wondering how this vine came into your yard and you know you never would have planted it on purpose,  you can thank a little birdy flying overhead.

Balsam pear is easy to pull up roots and all.  Or if needed you can remove it using a non selective herbicide , if it's in an area all by itself.  But be careful, don't get one of these products on any plants or shrubs that you want to keep.

Your palms may need some attention

Florida has lots of tropical bulbs to offer

Best Beets in a Long Time this Year

Time to spruce up the pool and patio