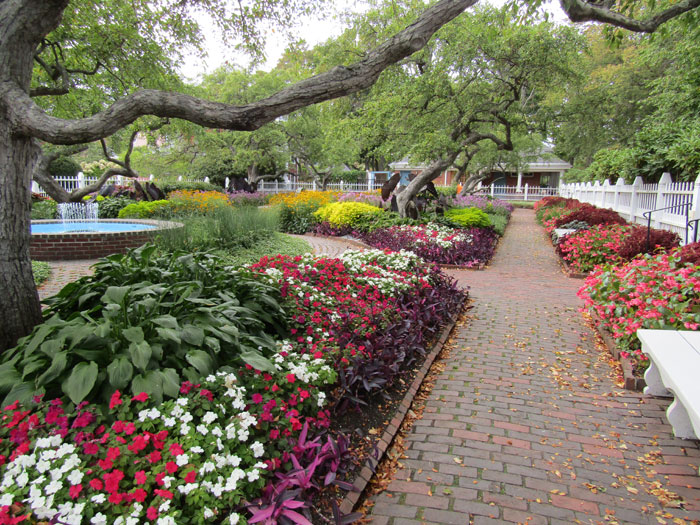 Colorful flowers got a boost from an extended summer but vegetable gardens had completed their harvests during our recent northern visit. Yes, we were off on one of discovery tours of northern gardens during early October.  It was amazing to find the flower gardens in full bloom and healthy during the fall season.  Normally by now they would have been chilled or had a frost but most were extremely colorful.

At the top of the colorful displays were the begonias, rudbeckia, impatiens  and coleus.  One large garden at Prescott Park in the City of Portsmouth, New Hampshire was maybe the best we have seen during our visits.  The color was well arranged and the beds getting great care.   We were told a new horticulturist was on staff and making the gardens especially attractive. The flowers looked like they could continue for months but we knew it would only be a short period of time before the cold arrived to end the season.

Prescott Park's Display gardens looked great too.  Of special interest were the zinnias, marigolds impatiens, ornamental sweet potatoes and celosia.  New All America Selections are displayed in this gardens where we could make year end comparisons.

Fall color was arriving and increased as we headed north on the way to the Fryeburgh Fair in Maine. Sumacs were decked with  their orange to red leaves, aspens yellow and the maples orange to bronze in color.  We have visited the Fair for many years to check on agricultural displays and this time got to see the farm animals of many types.  Little pigs captured much of our attention as they wobbled about but also enjoyable were sheep, alpaca, goats and cows.  All were within arms reach for petting.   We also saw a 435-pound blue ribbon wining pumpkin and a number of agricultural crop displays.  In general  like many fairs, except for the animals,  the agriculture participation has given way to commercial sales booths that seem to make the visit less exciting

As mentioned harvest time was over for most home and commercial gardens.  We did find a few end of season tomatoes, squash and peppers at Beach Plum Farm Community Gardens in Wells, Maine. Still producing was the greens of kale, lettuce and similar.  Almost every garden did have a flower display that was in full bloom.  It was a great time to enjoy the color.

Towns like Ogunquit, Maine were ready for Halloween with elaborate displays to attract residents and tourists.  Also, most homes and commercial establishment had colorful displays of lingering but attractive flowers. Of course many had added mums a traditional flower of fall. And did I mention it was a cool place to visit after a long hot Florida summer.

2020 should start with some cleaning

Time to get the cool weather plants in the ground

A splash of color in the winter doldrums

Pansies can give you color in mid-winter