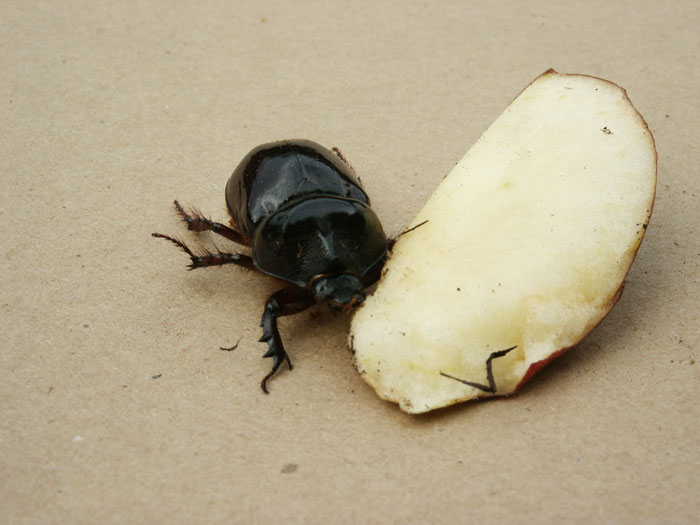 One time while Tom was out in our backyard he spied a very large beetle lumbering across his path.  He brought it inside and we decided give him a good home for a few days.  We soon found out that it wasn't a "he" but a lady Ox beetle.  So we have named her Ox-alice.

The way we found out "he" was a "she" is the male ox beetle has three horns on his thorax and the lady does not and she's a little smaller than the male would be.

She was  quite large a little over an inch long and about an inch wide and thick.  She had a rounded body and is dark brownish-black in color.
She's not an uncommon beetle in Florida and her relatives can be found in much of the lower United States.
Ox-Alice started off her life as a grub living in the soil and perhaps did a little damage to plants and eating roots of turf.  The grubs also will eat rotten wood and composted vegetation.   But in her adult stage of life she is no threat at all to anything.  Her diet now is fruit which has dropped to the ground and in captivity she is enjoys sliced apple and peaches.  She's a lucky beetle.
We eventually set her free with a little slice of apple.  She can have a life span of about 4 months and soon digs a hole in the ground and the resulting mound has a 3/4" hole in it.   There she lays her eggs.....and the life cycle of the Ox Beetle  begins again.   So if you see a little mound of dirt with a large hole in the top in your yard....let it be......it might be Ox-alice ensuring the survival of her family.

Time to feed your starving lawn

Time to get busy with some things you may be neglecting

Ten Ways to Kill a Tree

Paper wasps can be a good thing for the garden