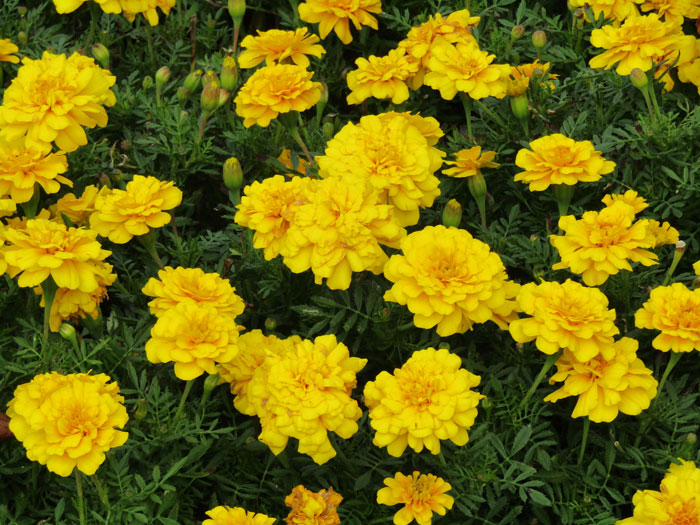 Marigolds are native to the Americas from Argentina north to New Mexico and Arizona. The earliest use of marigolds was by the Aztec people who attributed magical, religious and medicinal properties to them. The National Garden Bureau found the first recorded use of marigolds in 1552.  They were thought to have magical powers and were used as an herb to prevent hiccups, being struck by lightning, or to help people to cross a river safely.

Early Aztecs bred them for increasingly large blooms.  In the 1500?s, seeds were taken from the Aztecs by early Spanish explorers to Spain where they were cultivated and grown in monastery gardens.  From there they went to France and Northern Africa and developed into a taller version.  During a 1535 expedition there the taller form, now a ?naturalized? version, was seen and mistakenly thought to be native wildflowers.  Seeds were collected and off to Spain they went again.... with another new name.  This went back and forth well into the 1700's.

In Latin America, Marigolds were used in religious ceremonies and holidays.    Flower heads were scattered on relatives graves and even now there is a profusion of marigolds in cemeteries.

Shortly after our Revolutionary War, they were re-introduced to North American gardeners.  Marigolds ?just happened? to be one of many plants shipped to us as a young country.
At the turn of the century, disease and subsequent decline had just about reduced many of our early and popular flowers here in the United States.  A fresh new flower was definitely needed. In 1915 the Burpee seed company felt that marigolds held promise and decided to feature them in their catalog.  Since the 1920?s marigold breeding has developed hundreds of new varieties.

Another nice thing about marigolds is they appear to be quite nematode resistant.  Some of the harmful nematodes can be greatly reduced by marigolds growing in the soil. Marigolds can be planted during all the warm months so give some a try in flower beds and in planters. Select varieties tall or small to make your landscape more attractive.

The Best of English Gardens Including The Chelsea Flower Show