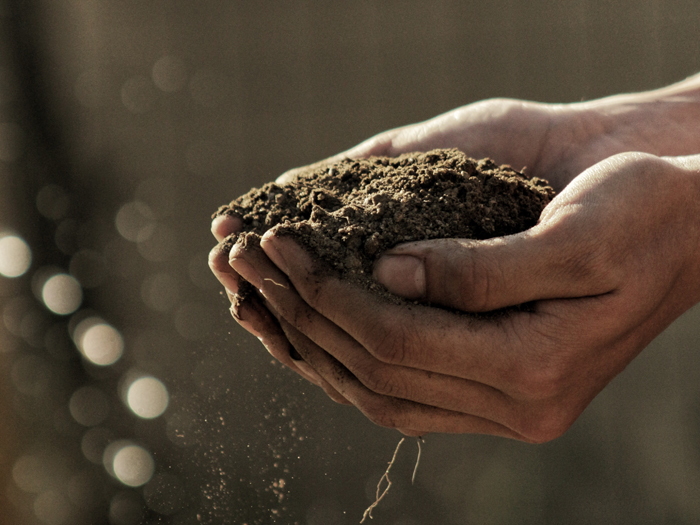 
Cornucopia is a curved, hollow goat's horn or similarly shaped receptacle (such as a horn-shaped basket) that is overflowing especially with fruit and vegetables (such as gourds, ears of corn, apples, and grapes) and is used as a decorative motif that symbolizes abundance. Also called horn of plenty, Cornucopia comes from the Latin cornu copiae, which translates literally as "horn of plenty." A traditional staple of feasts, the cornucopia is believed to represent the horn of a goat from Greek mythology. According to legend, it was from this horn that the god Zeus was fed as an infant. Later, the horn was filled with flowers and fruits, and given as a present to Zeus. The filled horn (or a receptacle resembling it) has long served as a traditional symbol in art and decoration to suggest a store of abundance. The word first appeared in English in the early 16th century; a century later, it developed the figurative sense of an overflowing supply.
Credit to Merriam-Webster.


How to make a Bread Cornucopia:  https://www.youtube.com/watch?v=L50efSsqJfs
November 13, 2021
AUTOTROPH

An autotroph is an organism that can produce its own food using light, water, carbon dioxide, or other chemicals. Because autotrophs produce their own food, they are sometimes called producers.
Plants are the most familiar type of autotroph, but there are many different kinds of autotrophic organisms. Algae, which live in water and whose larger forms are known seaweed, is autotrophic. Phytoplankton, tiny organisms that live in the ocean, are autotrophs. Some types of bacteria are autotrophs.

Most autotrophs use a process called photosynthesis to make their food. In photosynthesis, autotrophs use energy from the sun to convert water from the soil and carbon dioxide from the air into a nutrient called glucose. Glucose is a type of sugar. The glucose gives plants energy. Plants also use glucose to make cellulose, a substance they use to grow and build cell walls.

All plants with green leaves, from the tiniest mosses to towering fir trees, synthesize, or create, their own food through photosynthesis. Algae, phytoplankton, and some bacteria also perform photosynthesis.

Bacteria that live in the deep ocean, near hydrothermal vents, also produce food through chemosynthesis. A hydrothermal vent is a narrow crack in the seafloor. Seawater seeps down through the crack into hot, partly melted rock below. The boiling-hot water then circulates back up into the ocean, loaded with minerals from the hot rock. These minerals include hydrogen sulfide, which the bacteria use in chemosynthesis.

All food chains start with some type of autotroph (producer). For example, autotrophs such as grasses grow in the Rocky Mountains. Mule deer are herbivores (primary consumers), which feed on the autotrophic grasses. Carnivores (secondary consumers) such as mountain lions hunt and consume the deer.

Cover crops are an agricultural tool where plants are specifically planted to cover the soil rather than as a crop to be harvested. Cover crops may be an off-season crop planted after harvesting a crop grown to be sold for profit. Cover crops can be grown during an off-season like winter.

Cover crops help agricultural farms reduce soil erosion by decreasing the rate and amount of water runoff of the fields which pollutes waterways and ecosystems down river.

Competition from cover crops and lack of sunlight from taller plants reduces weeds and can prevent weed germination.

Certain cover crops? allelopathic properties disrupt disease cycles by reducing bacterial and fungal diseases, and parasitic nematodes. Plants in the Brassicaceae family, such as mustards, have been widely shown to suppress fungal disease populations through the release of naturally occurring toxic chemicals found in plant tissue. Did you ever think you would learn that Brussel sprouts, cabbages, horseradish, and watercress, have natural toxic chemicals that help prevent diseases found in the soil?

Other benefits of cover crops are growing them as a natural pest control that also supports a higher diversity of plants for wildlife.

October 30, 2021
DECOMPOSITION
Have you ever noticed during the Fall and again in Spring with Florida oak leaves, that if you don?t rake up the leaves on the sidewalk in front of your house. That after a few months, the leaves have turned into soil?  And the scary part is you didn?t have to do anything!  The American Heritage Science Dictionary defines decomposition as the separation of a substance into simpler substances or basic elements. Decomposition can be brought about by exposure to heat, light, or chemical or biological activity. The process of breaking down organic material, such as dead plant or animal tissue, into smaller molecules that are available for use by the organisms of an ecosystem. Decomposition is carried on by bacteria, fungi, protists, worms, and certain other organisms.


Rhizome is derived from ancient Greek word rhizōma, meaning "mass of roots," but rhizomes aren't roots at all.  Like bulbs, corms, and tubers, rhizomes are a type of underground stem. Unlike roots, plants use rhizomes for food storage and reproduction.

A rhizome (also known as rootstock) is a type of plant stem situated either at the soil surface or underground that contains nodes from which roots and shoots originate rhizomes are unique in that they grow perpendicular, permitting new shoots to grow up out of the ground. When separated, each piece of a rhizome is capable of producing a new plant.

The primary function of the rhizome is the storage of nutrients, including carbohydrates and proteins, until the plant requires them for the growth of new shoots or to survive the winter in a process termed vegetative reproduction. Farmers use vegetative reproduction to laterally propagate plants such as hops, ginger and various grass species. Some rhizomes are also consumed or used as a seasoning, including ginger and turmeric.

By far the most dominant type of rhizome is the underground rhizome, which is situated underground and includes Venus flytrap, Chinese lantern, western poison-oak, hops, Alstroemeria, bamboo. lily of the valley, and canna lily. Trumpet creeper, nandina, many clump forming grasses, and Epimediums also have rhizomes, Many can be weeds like bermudagrass, Johnson grass, Bermuda grass, and purple nut sedge.


While most rhizomes are situated underground, some plants have rhizomes that grow at the soil level or above. Examples of these plant species include ferns and irises.

The majority of rhizomes occur as a single layer from which shoots and roots originate. However, there are some rare plant species which form multiple tiered rhizomes in a complex network e.g., Giant Horsetails.

Source:  Biologydictionary.net (2021)
September 25, 2021
"ESPALIER"
Espalier (pronounced i-spal-yer)  is the horticultural term first used in 1662 (Merriam-Webster) that defined an ancient farming practice of keeping fruiting plants at a shorter height and width producing fruit in smaller areas. Plant branches are tied or wired to a set or rails, metal, wire, or wood, to force the plant's branches to grow in a specific direction. Espaliers can become works of art when grown in a formal ornamental design. They are usually placed flat against a structure such as a wall, fence, or trellis.
"Espaliers, trained into flat two-dimensional forms, are used not only for decorative purposes, but also for gardens in which space is limited. In a temperate climate, espaliers may be trained next to a wall that can reflect more sunlight and retain heat overnight or orientated so that they absorb maximum sunlight by training them parallel to the equator. These two strategies allow the season to be extended so that fruit has more time to mature." 1
1 https://en.wikipedia.org/wiki/Espalier
September 18, 2021
"TROWEL"
Trowels were one of the earliest tools invented by man. Garden trowels are a hand tool with a pointed, scoop-shaped metal blade and wooden, metal, or plastic handle. It is comparable to a spade or shovel, but is generally much smaller, being designed for use with one hand. It is used for breaking up earth, digging small holes, especially for planting and weeding, mixing in fertilizer or other additives, and transferring plants to pots.
Garden trowels are available in different widths and sizes.  Narrow-bladed trowels can be used in narrow areas between pavers or plant small bulbs or plants. Scoop-shaped or wide blades can be used for digging in raised beds where taller shovels would be difficult.
Source: https://en.wikipedia.org/wiki/Trowel
September 11, 2021
"MONOCOTYLEDON"

Monocotyledon, or monocot for short, refers to one of two groups of flowering plants. Flowering plants are placed into two categories. monocots and dicots.

Monocots have seeds that contain a single emerging leaf known as a cotyledon. This category provides a majority of the world's most important agricultural crops including, rice, wheat, corn, sugar cane, bamboo, onion, and garlic.

Monocots have different characteristics than dicots.

For more information on monocots: https://biologydictionary.net/monocot/
September 4, 2021
"ANNUAL"
The definition of the word annual is "a plant that germinates, blossoms, produces seeds, and dies in one growing season. They are common in environments with short growing seasons. Most desert plants are annuals, germinating and flowering after rainfall. Many common weeds, wildflowers, garden flowers, and vegetables are annuals."
1Some of the Northern garden zone annuals can be grown here in Florida year-round or in different seasons than our snowbird states. In garden zones 5 through 8, alyssum, delphiniums, foxgloves, geraniums, hollyhocks, pansy, petunias, snapdragons, stock, violas, and verbena are usually planted in Spring. Not in Florida - our mild weather October through March allows us to plant those wonderful annuals in the wintertime. So, if you live here during the winter and don't know what to plant - look for what you grow during the Spring in Ohio and Michigan. We have a 30+ Summer annuals that can take our heat and rainy season. Annuals provide that boost of color, fragrance, and butterfly resources for our gardens during our sunny, but cooler periods..
Annuals are considered high maintenance, more expensive, and shorter-lived, so they should be planted in smaller numbers than perennials or ornamentals. You can plant annuals in containers, garden beds, hanging baskets, and window boxes.

For more information on Gardening with Annuals in Florida, check out https://edis.ifas.ufl.edu/publication/MG319

Ways to Celebrate Gardening in August!