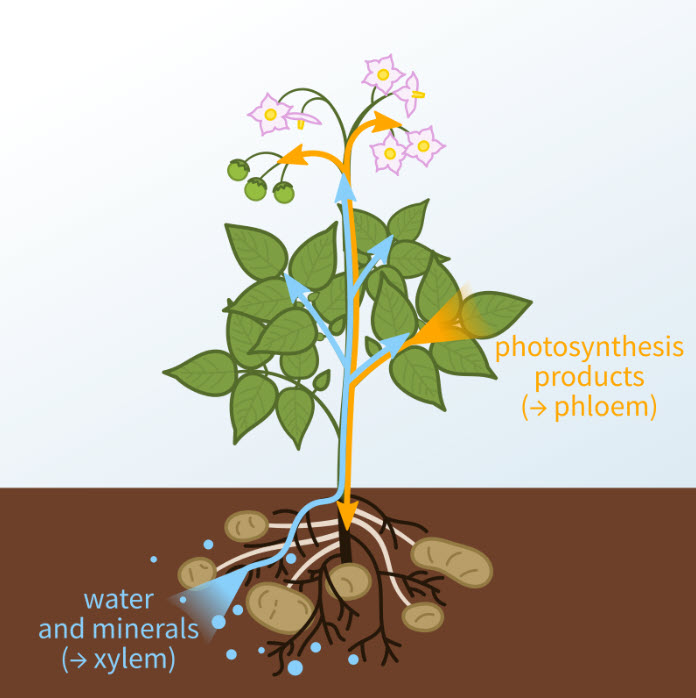 Xylem (xy?lem | \ ˈzī-ləm) is one of the two types of transport tissue in vascular plants, the other being phloem. The basic function of xylem is to transport water from roots to stems and leaves, but it also transports nutrients. The word xylem is derived from the Ancient Greek word ξύλον (xylon), meaning "wood"; the best-known xylem tissue is wood, though it is found throughout a plant.

In the graphic Xylem (blue) carries water from the roots upwards.

Phloem (/ˈfloʊ.əm/, FLOH-əm) is the living tissue in vascular plants that transports the soluble organic compounds made during photosynthesis, in particular the sugar sucrose, to the rest of the plant. (orange) carries products of photosynthesis from the place of their origin to organs where they are needed, these organs are called roots, storage organs, flowers, and fruits.

In trees, the phloem is the innermost layer of the bark, hence the name, derived from the Ancient Greek word φλοιός (phloi?s), meaning "bark". Both xylem and phloem terms were introduced by Carl N?geli in 1858. Carl Wilhelm von N?geli. (26 or 27 March 1817 ? 10 May 1891) was a Swiss botanist. He studied cell division and pollination but became known as the man who discouraged Gregor Mendel from further work on genetics.

In the graphic, the Phloem portion is orange.

The Best of English Gardens Including The Chelsea Flower Show